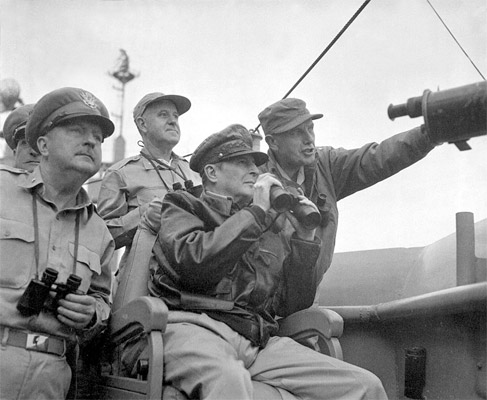 Hearing that South Korea had been invaded by the North in the early hours of June 25 1950, the US hurried to convene an emergency meeting of the UN Security Council. The Council unanimously passed a resolution declaring the invasion as an act of provocation that threatened international peace and security, and demanded that the North immediately withdraw its forces. Furthermore, the Council asked the member nations of the General Assembly for assistance and asked them not to aid the North by any means.

The US President, Harry S. Truman, ordered the US Navy and Air Force to provide support for the Korean forces on June 27. The Security Council passed a recommendation on that very day for the UN members to take the measures necessary to assist Korea in its efforts to repel the provocation by the North and to restore international peace and security on the Korean Peninsula, which quickly led to the deployment of US forces to Korea.

The Chief Commander of the US Forces in the Far East, General Douglas MacArthur, headquartered in Tokyo, visited Korea the next day and requested the Pentagon dispatch US ground troops. Following these military measures by the US, the Security Council passed another resolution on July 7 delegating the chief military leadership of the UN forces in Korea to the US. Gen. MacArthur. He became the Chief Commander of the UN Forces in Korea and the decision to dispatch UN Forces was reached. In other words, the combat units and medical units provided by 22 nations under the UN flag came under the leadership of Gen. MacArthur. South Korean President Syng-man Rhee signed a memorandum transferring the leadership of South Korean troops to Gen. MacArthur effective July 14.